Want to make a Medview Airline booking? It is now easier than ever before. Book online quickly and securely using the flight booking tool at the top of this page. Simply select the departure and destination cities, the dates you wish to travel and the number of passengers. Then click Search. You will then be presented with the cheapest flights available for your search requirements. It is possible that Medview Airline is not the cheapest airline on the specific date that you chose. You are able to display only Med View Airline flights by applying a filter to your search.

Med-View airline, more frequently written as Medview Airline, comes from a humble beginning. Med-View Airline came onto into the Nigeria airline scene with Hajj operations in the year 2007.

The remarkable performance in airlifting passengers earlier than expected during Hajj 2007/2008 no doubt, impressed the authorities of National Hajj Commission (NAHCON) to call upon the newly incorporated airline to carry out rescue operations for pilgrims stranded in Ilorin, Lagos, Sokoto, Maiduguri and Yola during outbound to Saudi Arabia and those stranded in Saudi Arabia during inbound to Nigeria.

Med-View Airline second time participation in pilgrims airlift, 2008/2009 Hajj operations, witnessed another excellent performance. Rescue operations for the stranded pilgrims were equally carried out to the delight of NAHCON.

The year 2009 witnessed Med-view Airline participating in Umrah (lesser Hajj) operation. Med-View Airline is now being called upon by some state Governments after carefully studying Med-View track record since incorporation, in helping to airlift their Pilgrims smoothly.

Med-View airline commenced domestic operation in November 2012 with a fleet of (2) Boeing 737-400 aircraft at inception and added another (1) Boeing 737-800 just a month after. Following the overwhelming acceptance of the new baby in the Nigerian market courtesy of its excellent service delivery, it plans to introduce (2) more B737-800 in the 2nd quarter of 2013 in order to alleviate the plight of the local travellers and offer customers value for money. In no distant future, Med-View airline intends to operate regional and international air services after obtaining necessary permits from the regulatory authority.

Med-view Airline is an emerging giant in the comity of reputable carriers in Sub-Sahara Africa.

Med-View was in the news (July 2017) regarding a stowaway on a Lagos to London flight. Aviation regulatory authorities have begun investigating another stowaway on Med-View Airlines’ Lagos-London flight. The stowaway hid in the front wheel of the commercial flight, travelling unnoticed from Lagos to London and back to Lagos last weekend. It was, however, a mystery that man was recovered alive and well too, after over 12 hours in the air.

A maximum of 23kg baggage is allowed on all domestic flights.

A maximum of 30kg baggage on regional flights.

A maximum of 40kg baggage for domestic flights.

A maximum of 40kg baggage is allowed on regional flights.

You can make a Medview Airline Booking to any of the following destinations. More destinations are being added soon.

You can get in contact with Medview Airline with the following details:

You can view the live aircraft tracker here. 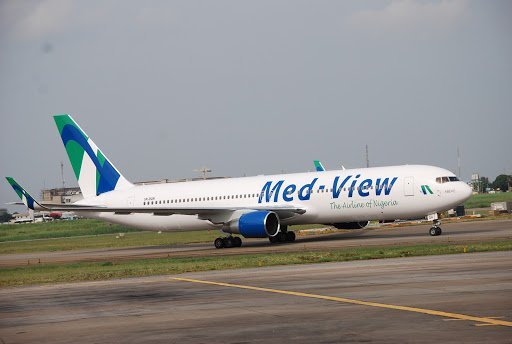 If you have a Medview Airline booking you can check-in online 24Hours before the departure of your flight.

To check in, go to Manage My Booking on the home page of our website and enter your surname and PNR appropriately. 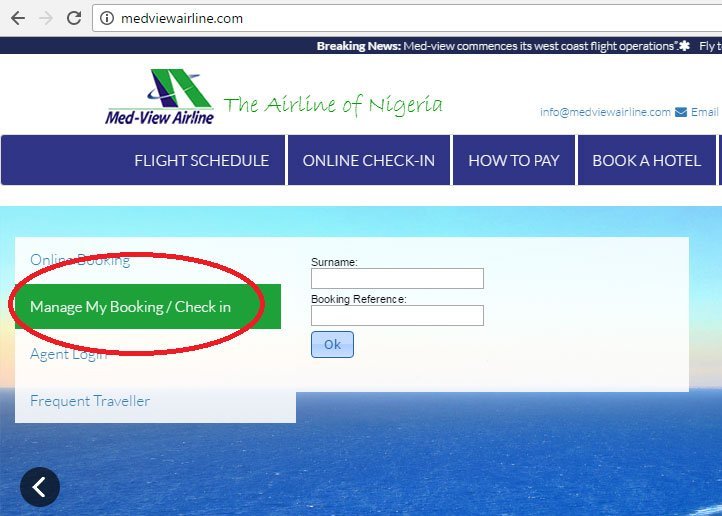 Do you want to make an Medview Airline booking? It’s easy and affordable with www.flightscanner.com.ng

Find cheap Medview Airline flights using our booking portal at the top of this page.

You can also make an Arik Air Booking here.

Medview Airline in the news

Medview Airline Apologises To Passengers Over Flights Disruption – 18 May 2018