The story of Virgin Atlantic Airlines began with Virgin Records in the 1980s which signed record labels for music legends like the Rolling Stones and Janet Jackson.

The airline itself was launched in 1984, and within 6 years had sold more than one million flights. Virgin Atlantic also made the record books by being the first to provide business class passengers with their own TVs.

Sir Richard Branson and a team of dedicated employees were responsible for the expansion of this successful airline in the 1990s and 2000s. This decade also saw the evolution of the airline’s super economy class into the award-winning premium economy class. Virgin Atlantic went from strength to strength in the early 2000s. The Upper Class Suite, with the most comfortable beds in business class was developed during this time.

Virgin Atlantic has code-share agreements with 7 other airlines:

The Virgin fleet consists mainly of Airbuses and Boeings.

Virgin Atlantic Airlines is controlled by the holding company Virgin Atlantic Limited, which is part of the Virgin group. It is known for stepping up to the challenge of taking responsibility for its impact on the environment. The airline keeps up-to-date with aircraft technology in an effort to minimize fuel consumption and to minimize environmental impact. Virgin is constantly working on sustainability projects.

Today Virgin Atlantic Airlines is based in Heathrow and Gatwick Airport in London, and it has a secondary base in Manchester. This Airline can take you to more than 33 major cities and destinations around the world, including Miami, New York, Washington, Shanghai, Dubai, Hong Kong, Boston and Delhi.

It also has a presence in Africa, in Johannesburg and Lagos. Virgin Atlantic offers some of the cheapest flights from Lagos to London Heathrow (LOS to LHR) that are available today, especially if you book your ticket in advance using the flight booking tool at the top of this page. Virgin’s partnership with Delta Airlines enables you to book cheap flights to more than 200 destinations across America including: 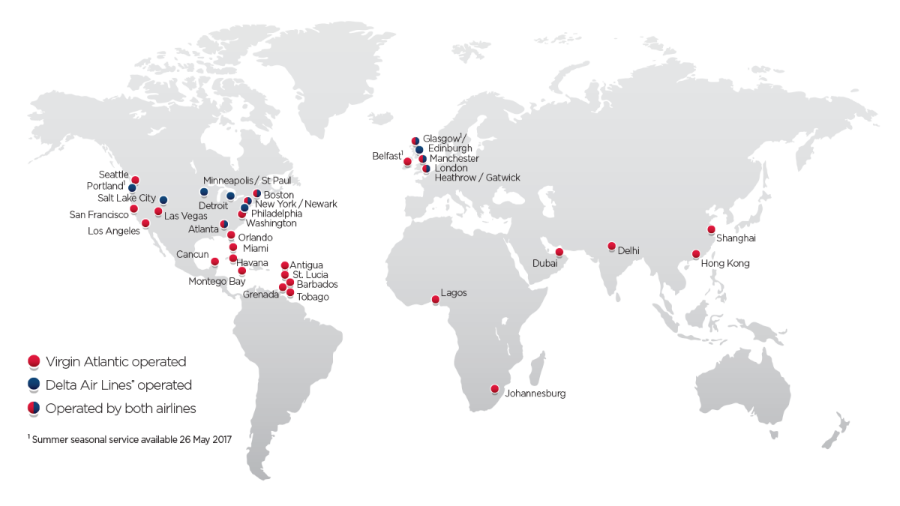 Virgin Atlantic is the most popular airline flying from Lagos to London LHR (Heathrow). The reason for this becomes immediately clear when you fly on one of the three cabins offered on these flights.

The cabin classes are economy class, premium economy and upper class (Virgin business class). But it would be a mistake to think that this airline conforms to the usual standard of having 3 distinct classes.

When you fly economy, you can choose from delight, classic and light:

All economy flights include essentials like drinks, snacks and meals, as well as in-flight entertainment for longer flights and 10kg free hand luggage. It has won numerous awards over the years, including an award for best passenger assistance initiatives and a world travel award for being the best airline to fly from Europe to America. Find out more about the three economy class levels here.

Flying between Lagos and London

Are you in Lagos and want to travel to London? Book your Lagos to London flight with Virgin Atlantic for competitive prices and a great experience. Book your tickets from Lagos to London Heathrow using the flight booking tool at the top of this page.

Make your Virgin Atlantic online booking by navigating to the Virgin Atlantic page and using the flight booking tool. You will have to provide the following information in order to be able to view and compare flights:

You will also have to select the cabin you would prefer.

Be informed of upcoming Virgin Atlantic sales and specials by signing up for our newsletter and joining our Facebook page. This way, you can ensure that you will be informed about cheap flight deals. Note that flight prices are subject to change without prior notice. Book now, to avoid paying more.